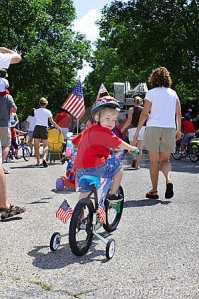 Yesterday, was the Fourth of July and as usual I attended our neighborhood parade. Every year, our neighborhood hosts a parade with a flag raising, a recitation of the Star Spangled Banner, home-made floats, decorated bikes and usually a fire truck or police escort. This year, I was only joined for the parade by my mother and my Cavalier King Charles Spaniel since my teenage kids took the mid-week holiday as an opportunity to sleep in and laze around on a Wednesday morning in their pj’s. In years past, they’ve decorated their bikes and helmets and happily rode their bikes as part of the parade.

Regardless, my mother, dog and I enjoyed a lovely morning together celebrating the day. As we chatted with some of our neighbors, a women approached me. She started with,”I don’t think you will remember me, but about three years ago, when I was visiting this neighborhood and looking to buy a house here, you stopped with your dog and chatted with me about the neighborhood.” She said, “You mentioned the 4th of July parade and the fact that it is a very friendly neighborhood.” She said, “We didn’t end up buying that initial house in the neighborhood, but I was so touched by your kindness and figured this probably was a really great neighborhood that we continued to look in the neighborhood and did eventually buy a house here.” “We’ve been living in the neighborhood for three years now and I have often wondered if you actually still lived here and if I would bump into you one day.” She proceeded to tell me which street she lived on and which house on the street she’d bought. We chatted a little longer and then proceeded to say goodbye to each other. The story stayed with me all day because it was yet again a reminder that clearly our words matter. Our connecting with others makes a difference and even effect a decision someone might make. Sometimes we will learn about this (as I did yesterday after three years) but at other times we may not. What a tremendous delight it was to learn about this neighbors entry into our great little neighborhood.

A Mitzvah = A connection.  Cheers to yours.